Unicorn is an enforcer to the Maggia. He is voiced by Michael Daingerfield.

Later, Unicorn and Killer Shrike attempted to rob a Tong treasury building. When they both learned that the city would be destroyed by the bombs they had placed, they attempted to run for their lives, only to be dispatched by Gene as the Mandarin.

In Season two, when Iron Man once temporarily left town, Unicorn, Shrike, and the Maggia took advantage of his absence in town and robbed a diamond store, but their job was thwarted by War Machine, who fought and eventually defeated them.

Later on, under as yet unrevealed circumstances, Unicorn, Shrike and Whiplash entered employ under Justin Hammer. They guarded Iron Man at Hammer's ocean fortress while his armor was being removed. War Machine and Pepper, who was remote-controlling the Stealth Armor, arrived in the proverbial nick of time to put Tony's armor back on and recharge it. Unicorn showed off his suit's new improvements, beating on Iron Man, War Machine and Pepper until Iron man tripped him up and knocked him out with his rocket launchers. 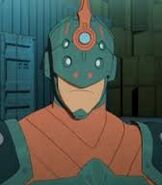