The Space Armor is a space variation of the Iron Man Armor.

The Space Armor made its debut in Fun With Lasers. When Tony heard that the Living Laser has returned and hijacked a space station that he could use to destroy entire cities, he flew into space to stop him, but only after taking a little detour with S.H.I.E.L.D. He entered the station and was taken by surprise by the Laser, he took some major punishment which damaged his oxygen reserves and Iron Man accidentally blew a big hole in the hangar which shot him into space. After barely finding a way to get back inside, he fought the Living Laser again, but Iron Man played on his inferiority complex to get him to enter the telescope he was going to use to destroy New York, which Iron Man had used to trap the Living Laser inside using its own mirrors.

Stark used his Space Armor in Doomsday to calibrate the settings of a satellite in space that he made to track down Makluan energy signatures in the world in order to find Mandarin.

Howard Stark equipped himself with the Space Armor in The Makluan Invasion Part 2: Unite! to attach his new quantum field neutralizer cannon to the Stark satellite, which will be used to temporarily disable the Makluan Rings. Tony used his Extremis to target the beam directly at the rings.

If the oxygen reserves are damaged while the pilot is in space, the pilot will have seconds of air left until imminent death. 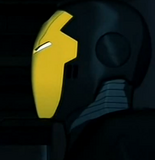