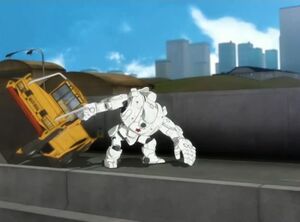 He was the test pilot for the Crimson Dynamo Armor when he and Anton Harchov were studying the surface of the sun. Harchov was forced to abandon him in solar orbit when a solar flare threatened to destroy the station that they were in.

Trapped around the sun for two years, staying alive thanks to the armor's life-support, Vanko eventually returned to Earth, crazed and looking for revenge on Harchov. He landed on a highway that's under construction and took a beeline for the Project Pegasus headquarters. After several failed attempts from Iron Man to stop him, he paid a visit to Project Pegasus to find out Vanko's reasons for targeting the building. Anton Harchov told him the whole story of leaving him in space. While breaking through the building, Vanko reveals one of his causes of his anger was that Harchov "took my (Vanko's) family from me." Pepper then does a search for his family. One last attempt by Iron Man to save Harchov allows Pepper enough time to bring in his family. After seeing them, Vanko abandons his attempts of revenge. He was then put in an ambulance and taken to a hospital.

Ivan is a dedicated person. Nothing stands in his way. He ignored Anton Harchov when he wanted to get a closer study of the sun and test the limits of the suit. When he crashed back to Earth, he showed little interest in anything other than his goal of killing Anton. He also showed no concern whatsoever for anything, besides his wife and son.

Ivan is a genius, smart enough to travel from the sun and land directly in New York City. Such calculations are difficult to perform without a scientific team or advanced computer.