The Iron Man Armor Mark I is the first suit of armor Tony uses to battle injustice as Iron Man. After this suit was destroyed by Whiplash, Tony replaces it with the Mark II armor.

Tony Stark creates his first armor almost completely on his own (with some of Rhodey's help.) and planned to show his dad, but his plane blew up and his father disappeared. Tony survived the worst of the crash thanks to his gauntlet's force field, but his heart and chest area were severely damaged. Tony put on his armor and had it fly him on auto pilot to Rhodey and Ho Yinsen put an implant in his heart. Tony first used his armor to spy on Obadiah Stane and found out that he weaponized his Earth Mover. When a runaway train was headed for Stark Tower, Iron Man managed to stop it and save many lives in the process. This incident spreads across the wire and the public calls him "Iron Man", an identity that Tony adopts and becomes a superhero.

In Man and Iron Man, the suit briefly gained sentience after a combination of upgrades mixed with the damage from a fight with Whiplash. In this state, it knocked Rhodey out, when he was going to disassemble the armor. Its primary directive was to protect Tony Stark, and to this end, it went as far as to encase Stark inside the armor permanently since Stark kept looking for trouble. It attempted to kill Rhodey, for which Stark took the blast, frying his heart plate. As Stark went into cardiac arrest, the armor sacrificed its sentience to save its creator's life.

In Season 2, Stark armors up for the first time in months. He uses the armor to save Justin Hammer from Whiplash. Later in the same episode, when Iron Man tried to save Obadiah Stane from Whiplash, in the battle, the Mark 1 armor was completely destroyed by him. Tony Stark ejected from the armor before it blew up, but he was badly injured. He recovered and the Mark I was replaced with the Mark II.

In Iron Man 2099, the armor made a brief cameo appearance while Tony was trying to test his new nano virus chips, when the Mark 2 repulsor was unable to send the nano-chips cause they were delicate, Pepper referred to Hawkeye for help. 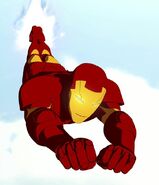 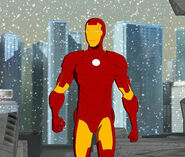