Howard Stark is the father of Tony Stark, and the CEO and founder of Stark International. He is voiced by James Candim. He is an accomplished and prolific inventor, and he and his son Tony have worked together on many advanced technological developments. His wife Maria died tragically from unknown causes when Tony was very young. He is the great-grandfather of Andros Stark.

When Howard refused to accept the plans of Obadiah Stane's Earth Mover project, his plane blew up. Tony survived, but Howard supposedly did not. In a later episode, he returns as a hologram message, telling Tony that he was the one who wanted him to finish his high school education, not Obadiah. In Technovore, Tony found out that Howard had built most of the SHIELD Helicarrier's weapon systems and he took it pretty bad that his own father had lied to him about helping people. However, in Designed Only for Chaos, Tony learns from Roberta that he stopped making weapons the day Tony was born.

In Tales of Suspense, Part 2, it was revealed that Gene Khan abducted Howard before his plane blew up. Gene claimed that Howard Stark had valuable information about the Makluan Rings.

He is revealed to be very much alive with Gene in the second season, when he is forced to help Gene find the rest of the Makluan Rings for him under the threat of hurting his son. They found the sixth and seventh rings.

In Mandarin's Quest, Gene couldn't solve the test for the eighth Makluan ring so he locked Howard in the dungeons of the Mandarin's Lair and went to ask for Tony's help into solving the test. After they worked together into defeating the Grim Reaper, War Machine showed up to fight Gene. The fight ended with Gene claiming the eighth ring and disappearing the dust cloud outside the temple and teleports away. He teleports back to the dungeons to show Howard that he has recovered the ring.

In Doomsday, he, Iron Man, and Gene stand against Doctor Doom and retrieve the ninth ring and Howard Stark. They undo Doom's opening of portals all over the world, but Mandarin takes back the ring then teleports away. Later, Howard returns to New York, seeing Tony face-to-face (Howard still doesn't know that Tony's true identity) and announces that the next day, they will take back Stark International.

Now that the world knows that Howard is back, he is depressed that Stark International is under the hands of a spoiled-CEO Hammer now. Tony encourages him to never give up. Back at the house, Howard Stark tells him of his opinion of Iron Man, a good guy but one who is as reckless as the people that he fights against. Tony wonders

if he knows. The next day, when Justin Hammer's villainy is exposed, Howard Stark reclaimed Stark International. He issues a public thank-you to Iron Man, knowing that Tony Stark is in the audience.

In The Dragonseed it's revealed he's been developing a weapon intended to disable the Mandarin rings. He also reveals that knew that Tony was Iron Man from the beginning, since he knew only his son could've developed the armor. In the finale episode, he make the weapons again using the specs in Tony's lab to take down the Makluan Overlord. 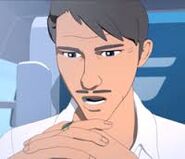