The Firebrand is a fire spirit and the guardian of the fourth Makluan Ring in the Temple of Temperance.

Tony, Rhodes, and Pepper travel to Mt. Saint Helens to retrieve the next ring. There is a horizontal light and two large bowls in between it, one filled with ice and another with coal. When Pepper accidentally throws the ice into the light, Rhodes ends up being possessed by Firebrand, turning him into a lava monster thus starting the Test of Temperance. When Pepper ends up doing the opposite by putting the coal into the light, Firebrand left Rhodey's body and possesses Pepper. Rhodes manages to call up Gene and learns that both the coal and the ice must go into the light together. Once that was done, Firebrand leaves Pepper's body and the test is passed.

Firebrand can possess anyone. When Firebrand possesses someone, that person turns into a lava creature until the test is passed. Firebrand is capable of: 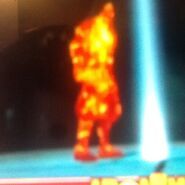