View source
watch 01:36
We're Getting Mutants in the MCU - The Loop
Do you like this video?
Play Sound

The Arctic Armor is a variation of the Iron Man suit.

Tony used his Arctic Armor in Best Served Cold. When Whitney caught a fatal illness from her mask, Tony used his Arctic Armor to go the Arctic Circle and find an abandoned Stark International outpost that has a mineral that he needs to make an antidote. But when Obadiah Stane used the villain Blizzard to retrieve it, he had other plans. Blizzard ambushed Iron Man, destroyed the only sample of ore, and left Iron Man for dead. However, Iron Man survived and started fighting Blizzard and a horribly delusional Whitney in her Madame Masque uniform. Blizzard was dispatched by Iron Man and he knocked out Obadiah Stane before Masque could kill him. Whitney was knocked out by him also and with the ore sample gone, Tony used the metal in his artificial heart to save her life. Later, both Tony and Whitney are shown to be alive and well.

The sonic disruptors inside the Arctic Armor were adapted and installed inside the gauntlets of the Iron Man Armor Mark II. 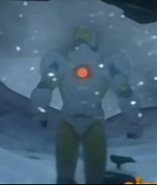 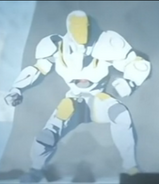 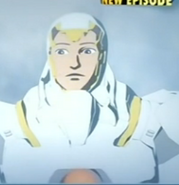